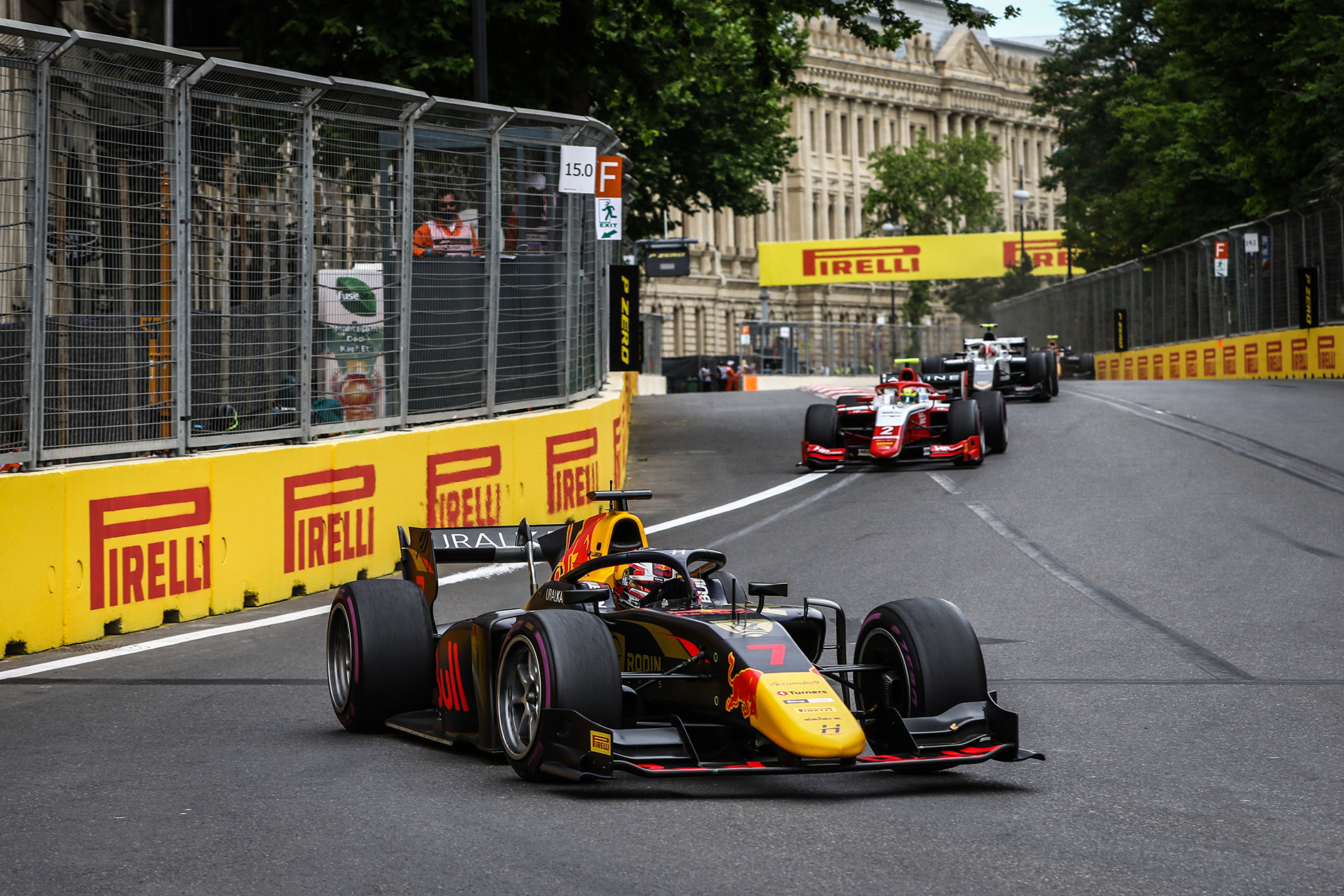 Pole, fastest ever lap and stirring fightbacks for Lawson on the streets of Baku.

Liam Lawson claimed his maiden Formula 2 pole in qualifying at Baku but was unable to convert that to a podium after a harsh penalty in the Feature race left him to fight his way back to finish sixth.

Lawson's pole time is now the fastest lap ever recorded in the Dallara 2018 car on the streets of the capital of Azerbaijan. The previous best time had been set by former Red Bull F1 driver Alex Albon, now Lawson's teammate in the Red Bull Ferrari DTM programme.

A last lap dash in qualifying was a head-to-head battle between Lawson and fellow Red Bull Junior Juri Vips, with the 19-year-old New Zealander coming out on top by 0.138s in the Red Bull/Rodin #7. The pair secured their Hitech GP team's first F2 front-row lockout.

"It's not at all what we wanted, I came into the weekend looking for a clean one and it started great with pole from Qualifying," he told the media. "I felt really good about the track and the car."

However, Lawson was unable to benefit from his pole starting position after an aggressive defending move on the opening lap led to a 10-seconds time penalty from the officials.

"I got a good start but Juri was a bit quicker, he squeezed at the first corner so I backed out and then defended from [Theo] Pouchaire. I was in front as I moved over but I guess we went into pit lane and that is why I got penalised."

"It is what it is, I can feel it was harsh but that doesn't change anything. I served the 10 second penalty at the pit stop and then pushed to get it back, killing the tyres again to get up to 6th."

In the opening reverse grid Sprint race of the weekend, Lawson's pole from Qualifying put him on P10 to start, but his race only lasted two corners before Felipe Drugovich hit the back of Oscar Piastri's car, pushing it across the nose of Lawson's car. Both cars retired, parked in the tyre barriers.

"So for Race 1 I just wanted to get through the start, But then got caught up in someone else's crash and the race ended right there."

The non-finish then placed him P20 for the start of the second Sprint race. A stirring drive through the field to finish 7th could have been even better.

"Race 2 was a really good race, came from P20, got to P6 and then went to change the brake bias and switched the car off. By the time I got it back on again I'd lost a couple of places."

"Such a shame, the pace was very good and even though I had killed the tyres on the way through we still had it with dead tyres."

Lawson pulled off another of his breath-taking passing manoeuvres, once again on Piastri, to steal back 7th place before the finish.

"It's very disappointing to be one of the fastest on the track all weekend and not come away with more."

The next round of the FIA F2 championship will be in conjunction with the British Grand Prix at Silverstone in mid-July.

In the meantime, Lawson will turn his attention to the opening rounds of the DTM championship where he will race for AF Corse in a Red Bull-backed Ferrari 488 GT3 Evo.

The opening rounds are at Monza, Italy next weekend before heading to Norisring, in Germany a fortnight later.