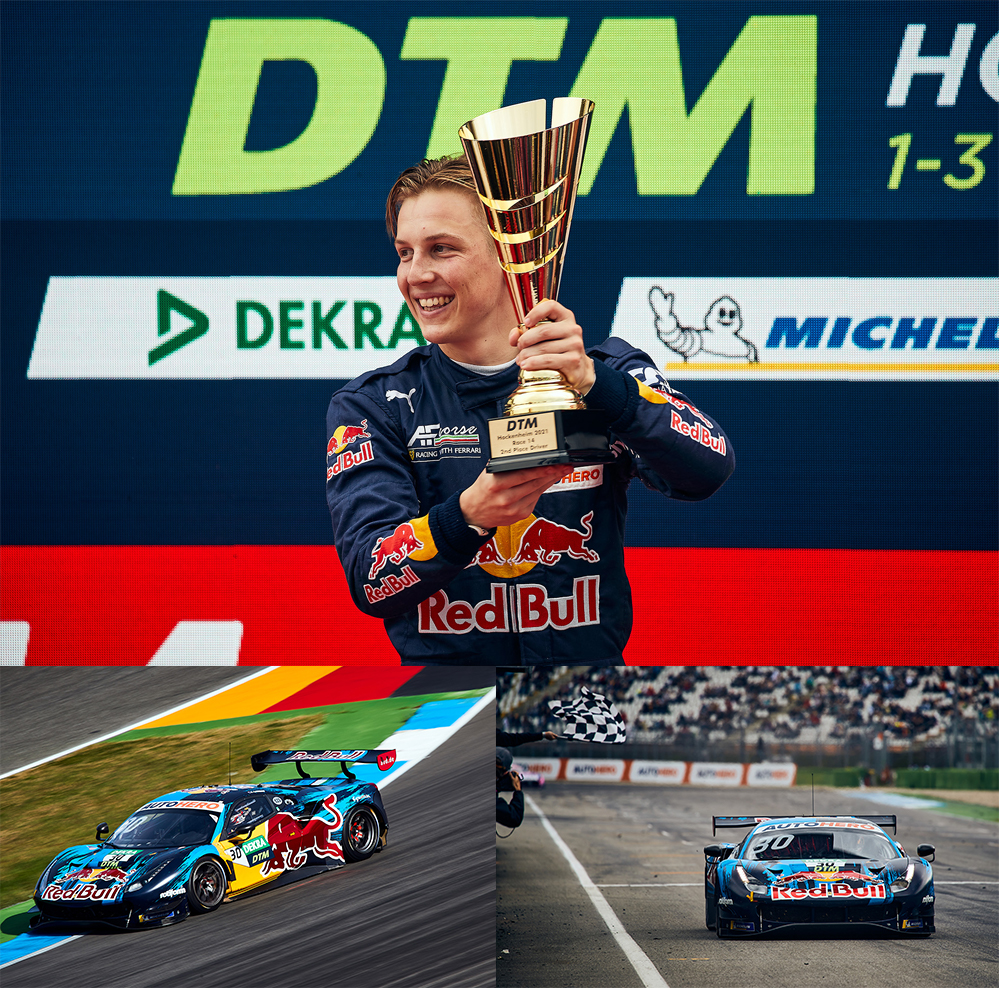 Lawson leads into DTM final after a scrappy round at Hockenheim

Liam Lawson has emerged from the final race at Hockenheim as the DTM championship leader, heading to the grand finale next weekend with a 14-point series lead.

After a fiery opening race at the famous German circuit when the 19-year-old Red Bull Junior lost his series lead to arch rival Kelvin van der Linde, the pair clashed yet again in the second race.

But this time the South African driver was penalised for contact to Lawson's Ferrari and received a 5-second penalty for the incident. It got worse for van der Linde when he copped another 5-second penalty for a pit-stop infringement and fell back to 10th place at the finish.

Lawson meanwhile took the chequered flag in second place behind the Mercedes of Lucas Auer and leapt back to the top of the leaderboard with his ninth podium from 14 races.

Auer got into the lead on the opening lap from P2 while Lawson and pole-setter van der Linde scrapped it out for second place, swapping positions several times.

"The start was super sketchy. Kelvin was very aggressive at the start, I don't think he would have done it on purpose but I got a massive hit from behind and went wide," said Lawson at the finish.

Once in front, Lawson controlled the pace over his closest rival and maintained his position through the compulsory pit-stop. Meanwhile van der Linde got shuffled back further by the two Mercedes of Maximilian Gotz and Daniel Juncadella.

"The pace after the pit-stop was really good. I was worried we'd stopped too early because yesterday we had a lot of [tyre] degradation but the car was really fast."

"In the end we started to catch Lucas but the gap was just too big."

Lawson closed to within 5-seconds of the Austrian Mercedes driver who took his second victory of the season.

In the opening race, van der Linde took victory from pole position with Lawson's AF Corse teammate Alex Albon grabbing second place after a late race charge on fresher tyres while Lawson, who held third for much of the race, was pushed back to fourth on the last lap by an aggressive Mike Rockenfeller.

After that race van der Linde and Lawson were tied on 188 points, but the advantage went to van der Linde for having scored one more race victory.

Rockenfeller, the Audi teammate of van der Linde, also made a late charge having also pitted much later and used his fresher tyres to advantage and squeezed by in a panel-rubbing effort that upset the young Kiwi driver, who voiced his displeasure to Rockenfeller at the end of the race.

Heading into the last two races of the season at the Norisring street circuit, Lawson leads the DTM Championship with 206 points to van der Linde on 192 and Gotz with 180.

Lawson's weekend was made even brighter with the announcement overnight that he will take part in the F1 Young Driver test at Abu Dhabi in December with the AlphaTauri team.